Genesis 1:1,2,20-22  (1) In the beginning God created the heavens and the earth. The earth was without form, and void; and darkness was on the face of the deep. And the Spirit of God was hovering over the face of the waters.  (20) Then God said, “Let the waters abound with an abundance of living creatures, and let birds fly above the earth across the face of the firmament of the heavens.” So God created great sea creatures and every living things that moves, with which the waters abounded, according to their kind, and every winged bird according to its kind.And God saw that it was good. And God blessed them, saying, “Be fruitful and multiply, and fill the waters in the seas, and let birds multiply on the earth.”

Psalm 8:6-9  You made them rulers over the works of your hands, you put everything under their feet: all flocks and herds and the animals of the wild, the birds of the sky, and the fish in the sea, all that swim the paths of the seas. LORD, our Lord, how majestic is your name in all the earth!

Job 12:10  In his hand is the life of every creature and the breath of all mankind.

I am blessed to live on the coast of NC, truly on the coast. It is a 60 second walk from my home to sitting in the sand on the beach.  And every May through September, female turtles come ashore and lay their eggs, multiple eggs.  There are dedicated folks who walk a specific section of the beach early each morning looking for the telltale signs of a turtle coming up and whether she actually laid eggs, or for some reason moved to a different place.  The nests are then marked, roped off, and the wait begins.

Although there have been several nests in my neighborhood, the timing has never been quite right for me to witness turtle hatchlings springing up from the sand and scurrying about. They want to go toward the ocean, but are sometimes drawn away from the ocean and move toward bright lights. Of course, this is terrible, and one more danger of death for them.

God knows the witnessing of hatchlings coming forth is on my list of blessings, so I have no doubt I will see it eventually. I was able to rescue an escapee one early morning and the caretakers at the turtle hospital on the island said to keep it in a basin with dry sand and cover with a dishtowel to keep it quiet and to help it conserve its strength until evening. 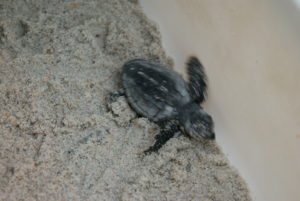 The whole process amazes me.  These females supposedly come back to the area of their birth and then lay the next generation. How miraculous is that? Somehow the area is imprinted for them, and they swim thousands of miles to return here to lay their eggs.  After approximately 60 days, depending on several factors including heat, the hatchlings begin digging upwards toward the freedom of air, a trek to the ocean, and then a long swim.  There are so many dangers the critters are subject to; gulls and other sea birds love this delicacy, confusion and disorientation if the lighting is too bright, perhaps going in a haphazard direction instead of head on to the ocean, and sometimes there are some which are not with the rest of the majority and when they make their way to freedom, it is not witnessed. These can be stepped on by an unsuspecting beach walker, snatched as breakfast for some bird, or lost in the sea oats and beach vegetation.

They swim a very long distance where they finally can settle and eat.  They will not return to coastal areas for a few years, when they are considered juvenile, no longer hatchlings.  I’ve included part of the information gathered about turtle hatchlings from an internet site.

“After an adult female sea turtle nests, she returns to the sea, leaving her nest and the eggs within it to develop on their own. The amount of time the egg takes to hatch varies among the different species and is influenced by environmental conditions such as the temperature of the sand. The hatchlings do not have sex chromosomes so their gender is determined by the temperature within the nest.

THE PIVOTAL TEMPERATURE OF A BABY TURTLE

Whether hatchlings are male or female depends on the temperature where they are in the nest, known as the “pivotal temperature.” The temperature varies slightly among species, ranging between roughly 83-85 degrees Fahrenheit (28-29 degrees Celsius), at which embryos within a nest develop into a mix of males and females. Temperatures above this range produce females and colder temperatures produce males.

After 45 to 70 days (depending on the species), the hatchlings begin to pip, or break out of their eggs, using a small temporary tooth located on their snout called a caruncle. Once out of their eggs, they will remain in the nest for a number of days. During this time they will absorb their yolk, which is attached by an umbilical to their abdomen. This yolk will provide them the much-needed energy for their first few days while they make their way from the nest to offshore waters.”  Copied from www.seeturtles.org 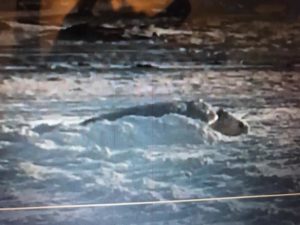 I find it miraculous these critters make it. Eggs are laid and left unattended. Mother moves on; no maternal direction here. Hatchlings are born and make the strenuous and treacherous journey to the ocean, facing many dangers. It is a wonder to me there are any left in the world to come to the beach and carry on the next cycle of laying and birthing.

To me this is proof God has every little critter in His hands.  Since so many of our days have been hovering near 90, I’m guessing we will have more female hatchlings.  If you have the opportunity and blessing of seeing any part of this miracle, and live or vacation at the beach, please keep in mind turning off outside lights.  Be respectful and quiet if you witness any of this.  Our God is so great.

Thanks for these blessings to “mybellaviews.”