Welcome to Praying Mantis
Previous Post: God cares who you are on the inside
Next Post: God’s placement eased depression

I have always had a fondness for praying mantises. After researching them, imagine my surprise to find they are members of the roach (YUCK) family, as well as the females sometimes kill their mates by eating their heads off. But even with those negative tidbits learned, I find them graceful, quiet, helpful in a garden, and maybe because I rarely see them, even more special. 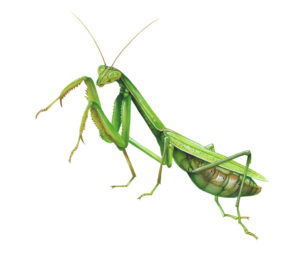 There are lots of things I enjoy and feel are blessings to my seeing eyes—cardinals, red-winged blackbirds, puppies, kittens, ocean and water, pretty trees, mountains, blue sky….my list is pretty lengthy. I feel so fortunate to have a long list of blessings. But, because I so very rarely seeing praying mantis bugs, they are too, a special blessing in my heart.

As a child, I kept one for a pet one summer. I called it ‘Thumbelina’ and ‘she’ (I have no idea if it was male or female), but she would ride my thumb each day as I played outside. When I had to go in, I’d place her back in the bush, and find her again the next time I was going out. This went on from late spring to early fall. After that summer, I never saw another for about 25 years. So because of that experience, praying mantis became important, special, to me. And God, of course, knew that. So, He’s only let e see them rarely.

So, after 25 years or so, as an adult, I was going through a period of life when I was making changes that would affect me and my son, as well as the man I was marrying and his children. “Is this the right decision, God? Please give me a sign.” And then…. there was a praying mantis that stayed around my front door stoop for several months—in fact until the end of December.

(Now, I rarely test God with “fleeces” or signs, but then I needed visual reassurance so ensure I avoided making more mistakes.) And isn’t it marvelous that God supplies what we need at the time we need it until we can grow away for the more child-like reassurances we require, or at least I required? “When I was a child I spoke like a child, I thought like a child….When I became a man, I gave up childish ways.” 1 Corinthians 13:11.

This week, I saw either three separate praying mantises…or the same one three times. Again, it’s been many years since I’ve seen one. The sight of it immediately brought a smile and heartfelt thanks for the blessing of the brief visit. And I wondered what kind of neat blessing God has plans to deliver soon. It seems just like Him to show me something that is rare and precious to me…a blessing indeed, and maybe as a precursor to more.

I am so thankful for the many blessings in ‘mybellaviews.’