Welcome to The Lord’s Turtles
Previous Post: Temptation, Christmas approaching, gifts for others
Next Post: Do you see blessings when you look?

Turtles have been around since the dinosaurs still walked our lands.  Sea turtles, all seven species are at risk of extermination. The adult females will lay their eggs on the same stretch of beach they were born. {How is that programmed into their brains if not for God}. The risks to sea turtles comes from sea birds as they are hatchlings, the fisherman as oftentimes turtles can get themselves caught in fishing nets, some countries catch and cook them, including grabbing and cooking the eggs, and as the temperate waters in the south start getting cold, the turtles may get caught in the colder waters which will hurt or kill them if not rescued.   Information obtained from the Oceana.com website. 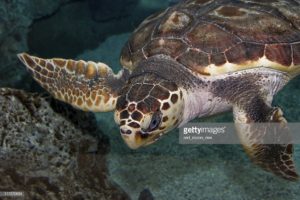 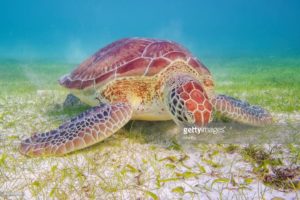 Living on the coast of North Carolina is lovely and temperate (usually). But one of the awesome things I have experienced, on a limited basis, is to see the turtle nests. Usually the nests are loggerheads, but these particular nests were laid by green turtle mamas. (not ninjas, but just as cool!) During Hurricane Joaquin, the turtle volunteers determined that too much erosion was taking place where Mother Green Turtle had deemed it safe to lay, so they relocated the nests closer to my area of the beach.
As the hatch date neared, the volunteers came back and would prepare the “runways” and sit near the nests awaiting the hatchlings. Each of the two nests had a few stragglers which came out, but I was doubtful that many would live after being transferred, and then having cold nights. So somewhat discouraged, I had stopped checking.
But one morning walking, I spotted one of the volunteer’s cars, so decided to check it out. The woman reported she and her husband had found all these hatchlings. But when they’d spotted them, it appeared all were lifeless; all were still, various distances from the nests, with a few lying immobile on their backs.
Discouraged, yet hopeful that perhaps a couple might still live, she and her hubby scooped them up and put them in a 5 gallon bucket. They each took a couple and gently, but diligently tried to warm them between their hands. When the turtles would respond, they’d place them in the bucket and take out others and repeat the procedure. Now, gently she “stirred” them with her hand and arm in the bucket, looking a lot like a chef creating something creamy, but giving a bit of warmth to each, and they began to come “alive.”
Now as I looked in on them, they were all squirming and crawling on top of one another. Maybe like children, each wanted to be first, ‘King of the Hill’, to win; anxious to hit the ocean and get their first true meal. I was so excited about it, as the woman let me hold a couple of the busy, squirming turtles. If turtle hatchlings are found during the day, the volunteers try to take them in and keep them until evening, as the sea birds find them a favorite, as well as easy prey, for their diets.
When I arrived home, I shared this with my neighbor who followed up with a trip to the nests. A volunteer who was sitting there at the time told her the nests would be dug up later that afternoon.
We arrived along with several others, and were privileged to see many of these critters dug out, alive and eager to hit the water God had directed. Knowledgeable volunteers moved the sand, and once they reached a depth of about 18” began finding eggs—some empty with hatchlings already moved on, some were obviously unfertilized, and some which had died.
From the first nest, they lifted seventeen eager, “mature” turtles. Maturity in this case is characterized by lack of an “embryo sack.” If a turtle had that little bit of protrusion, they were put in the immature bucket. This embryo sack contains necessary protein and the volunteers wanted all the protein used up by the little ones prior to setting them free. They also pulled some which were “pipping” which meant the young one was not totally free of its shell—head was protruding, and maybe one front leg, but they still had a way to go to be free of its shell.
The second nest was a lively one. Twenty-nine turtles were pulled from it, eleven which had no embryo sack left, while the others did, but all were eager to walk their path to the ocean. They were allowed to walk a distance of 10-12 feet to “imprint” their birth place as it is believed they return to the approximate location of birth when the female is ready to lay her own eggs in a few years. 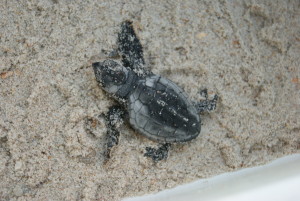 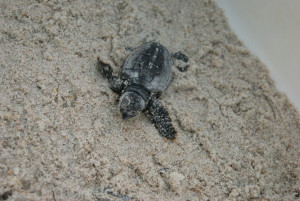 These were both a loggerhead rescued and held until evening when they could be released.  As usual I never have my phone at the time I’d love to capture an image.

I was filled with questions. How did they manage to claw their way to a distance of eighteen to twenty four inches of tightly packed sand? How did they recognize which way was up with no light or air to guide them? Now, after scratching out and up they still had to move the several yards to the ocean, and depending on low or high tide, the crawl could be short or much longer. But with seeming no hesitation, and an eagerness it was a joy to see, we watched as they walked unsteadily toward the water’s edge. Sometimes, one would veer off for a moment, then right itself and head further east. What called it to correct its path?
It was such a rewarding feeling to see so many live turtles emerging with the help of these volunteers. It was more special I am sure since I had been certain with all the moving of the nests and the very cold nights that none would live. (“Oh, Kathy, why do you still doubt?”—‘Thomas, Thomas, why do you still doubt?’ Here, put your hand in my side’.… I heard God ask). And of course, felt a little ashamed.  Why do I doubt?
But God is good and I was again rewarded, reminded and humbled to see these creatures and realize exactly how difficult their journey is from hatching, to trying to scramble up and out from the nest, and then make their way to the wide open ocean. Thank You, Thank You for your gifts.