Hebrews 13:16  But do not forget to do good and to share, for with such sacrifices God is well pleased

Matthew 5:42  Give to him who asks you, and from him who wants to borrow from you do not turn away.

I come from New England, and when an opportunity for us to move elsewhere and not have to return there to live, my husband I were blessed to be assigned to eastern NC. We were not winter people for several reasons—long winters, shortened daylight for several months, snow, cold, increased fuel costs to heat our home, and the rest of the list also involved winter issues. We were just not fans.

So we landed close to the coast. In mid-February of that first year, it was lovely and warm an d we hurried off to Lowes to buy flowers and bulbs. How blessed were we to be able to plant things in our garden and be able to see them so early in the season—technically still winter!

My cousin who was raised in Vermont came to visit for a short while that day while we were out planting, and he kept saying, “When Spring comes…”  Part of me laughed and countered with, “But this is Spring.” He never argued, just nodded and chatted. That night we had a freeze and my bulbs, plants and flowers almost all died. 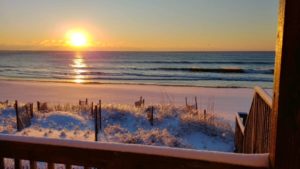 However, this week Jan 3, 2018, most of the eastern part of the country suffered snow and ice, and for our area, it was a real mess. A plow did a main street, but no parking lots were done, no side streets, so we stayed under ice and the bitter cold for several days. It was certainly pretty, but wreaked havoc with water pipes freezing or bursting, treacherous walking and yet we all remarked how blessed to see this. It is strange for snow to last longer than 36 hours or so in this area. For me it is wonderful.  Yay! Snow coming, here and gone! That is perfect for me. But this lingered, and the neighborhood came together to help one another. Those who didn’t have water borrowed a shower from neighbors who did; they would fill buckets to have flushing toilet ability, and so on. It was cool from that standpoint. We have a close neighborhood anyway, but it was fun to experience all the support shared.

But the best gift for me and the neighbors was the display of activity going on in the ocean. There were dolphins leaping and playing and putting on a wonderful free show. On Sunday we spotted two whales, a large and a smaller, moving north for about twenty minutes until they were out of sight.

So although this snow and cold lasted for several days, we saw the blessings in many areas. It was pretty, our neighbors had a festive time with one another, and the nature show supplied by God was phenomenal! And today, our temps are 59* as I write this—snow almost totally melted, the Sound which was ice covered for over a week is melted, and I am thankful for the wonderful life I have. I am blessed at ‘mybellaviews.’