Welcome to Why am I here? Do I have a Purpose?
Previous Post: Oh ye of little Faith…
Next Post: Family: love and discipline

Why am I here? Do I have a Purpose?

Galatians 5:13,14  For you, brethren, have been called to liberty; only do not use liberty as an opportunity for the flesh, but through love serve one another. For all the law is fulfilled in one word, even in this: “You shall love your neighbor as yourself.”  Galatians 5: 17  For the flesh lusts against the Spirit, and the Spirit against the flesh; and these are contrary to one another, so that you do not do the things that you wish.

Matthew 6:33  But seek first the kingdom of God and His righteousness, and all these things shall be added to you.

Philippians 2:13  for it is God who works in you both to will and to do for His good pleasure.

I think all people question why they are on earth, in this life.

We want more than going to school, getting a career, supporting ourselves or family members. Doing these things does bring about a certain amount of satisfaction for jobs well done, but people tend to feel like there is some other nebulous “more” there. It seems there’s an inherent, deep need to know what in the world our reason for being is. We develop a restlessness we can not quite define.

Oftentimes, there is a deep satisfaction with our jobs or professions. But as honorable as any work done to the best of one’s ability, there’s a deep need in most of us to find “the more.” We sense there is a deeper meaning…and many begin the search for whatever it is. We want deeper, more meaningful relationships and when those do not fully seem to satisfy the craving for that mysterious ‘more,’ we begin to look deeper. I wonder why we all strive for that; it seems to be in all of us. 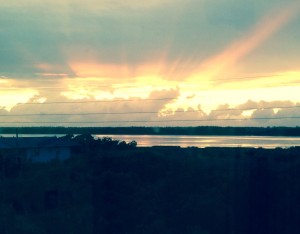 God has ingrained in us a deep need to seek Him. It may be a restless spirit and we cannot find a way to totally relax and be at peace; it may be nothing totally satisfies the craving for “more” something, but it is there. I believe this is a way God entices us to search for Him, to grasp Him to us. Throughout the Bible, it is clear He wants a relationship with us. We were the final aspect of His creation, He created us in His own image.

Let Us make man in Our image, according to Our likeness; let them have dominion over the fish of the sea, over the birds of the air, and over the cattle, over all the earth and over every creeping thing that creeps on the earth. So God created man in His own image. Genesis 1:26,27.

When He first placed Adam and Eve in that garden, He chatted with them, walked with them, and had a personal relationship with them. And through disobedience, humans (through the actions of Adam and Eve) severed those intimate ties.

Then we continued to live life within our own ideas, thoughts, desires and temptations. We chose waywardness almost every time we had a choice. Feeling we were smarter than the Creator, we tried marching to our own plans and desires. We supposed our way of doing things was so much more direct and pleasurable than God’s.  It has caused many tears and heartache by not following His will for our lives.

For several centuries, the Creator allowed us to stumble, breaking impossible “laws” constantly requiring us to need “sacrifices” of pigeons, goats, lambs and so forth to seek forgiveness.

Until, the Son, the Redeemer was sent to be the final sacrifice. He never succumbed to sin, and yet recognized it, lived among men and women who had and continued to sin even while he was with them. But He taught them through example, parables, and life that those sins could be forgiven and there was another way to live. . . . To love.

And for centuries, the teachings and prophecies written by many men, passed to them by God, and gathered into the Bible, have been shared and brought to peoples throughout the world. They, too, have felt the love and the forgiveness; the MORE we seem to seek. The desire seems to be fulfilled the closer and more intimate we get with our Creator.

And many of these people chose to become better and closer to this source, this Creator who loves unconditionally and helps us to love others, serve others, and thus attain that ‘more’ purpose we seek. The seeking and finding of Him, fulfills that restless desire for more.

The “more” is to love and serve others, to teach and lead others to the Creator. That is how the desire for “more” is fulfilled.

I know it has deepened mybellaviews.