Isaiah 25:8  He will swallow up death forever, and the Lord God will wipe away tears from all faces; the rebuke of His people He will take away from all the earth; for the Lord has spoken.

John 5:24  Most assuredly, I say to you, he who hears My word and believes in Him who sent Me has everlasting life, and shall not come into judgment, but has passed from death into life.

Romans 5:21   ….so that as sin reigned in death, even so grace might reign through righteousness to eternal life through Jesus Christ our Lord.

My beautiful, sweet, God-loving cousin died this morning. She’s gone home. Her death was not surprising. Over the past seven years she dealt with breast cancer first. Five years after treatment, on the day she was going to receive her “cured” pin, she was told she now had colon cancer which the tests revealed. She underwent chemotherapy, and was hospitalized for several days in the ICU when the medication caused her to be very ill.

But reassured after the medication, she was now cancer free, she enjoyed a few months of living with that belief. Until six months later when she was again told her cancer had not been totally killed, and she now had to have a permanent colostomy to remove the tumor to be cancer-free.

Six months later, she was told that unfortunately, you now have a large tumor in your liver and a smaller, although significant tumor in her lungs. There was no medical treatment that she wanted, or that was recommended.  Dawn opted to go home and enjoy each day she had left.

Dawn, her name means a new day, new opportunities, possibilities to serve, people to affect and enjoy, places to see and experience, and all the other meanings to starting a new day. And that’s the way she lived those last few months.

Dawn was filled with God’s love, grace, and the knowledge of where she would go when she left this earth. She walked and filled each day with grace, humor, and lots of love. She sparkled, and when she laughed, one heard the joy, love, and all-encompassing generosity she had. Dawn was one of those persons who sucked you into her warmth and love, who taught one who didn’t know God personally just how joyful that experience could be. She continued to hike, care for her husband and her dogs, enjoy her friends and family, laugh, and she also made plans for her final wishes to be done.

She was confident of her home awaiting her in heaven. Her only concern was to not have pain that could not be managed. Certainly, she did not want to be a burden, but she knew she had two nurses in the family who were more than willing to walk this path with her, and help in any way she needed.

I miss her and the wonderful times we had, and won’t have again in this life; but I know I will see her when it is my time to move from this life to live with God in the home He has created for me. Until then, thank You, God, for her and the impact she made on ‘mybellaviews.’

RIP until we meet again. 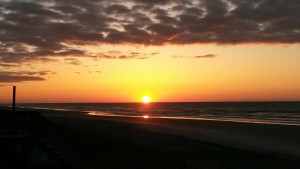